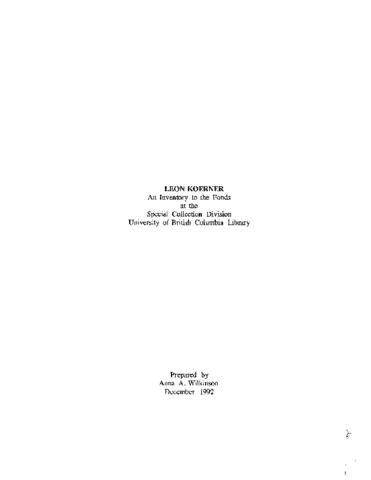 Born in what is now Czechoslovakia, Leon Koerner was a member of one of the leading families of the Austro-Hungarian Empire. He was educated at the Academie in Vienna, the London School of Economics and the Sorbonne in Paris. After serving in World War I, Koerner began his career in the lumber industry. In 1921 he married Theodora, a Shakespearean actress from Germany. Koerner remained in Czechoslovakia until 1938 at which time he came to Vancouver. He established the Alaska Pine Company Ltd. in New Westminster. Koerner relinquished his presidency of the company to his brother Walter. In 1955 the Leon and Thea Koerner Foundation was established with an initial endowment of one million dollars. Koerner served with the Foundation after his retirement until his death.

Box 96 in RBSC-ARC-1327 - Leon and Thea Koerner Foundation fonds contains some of Leon's personal items that were used to decorate the foundation's offices.