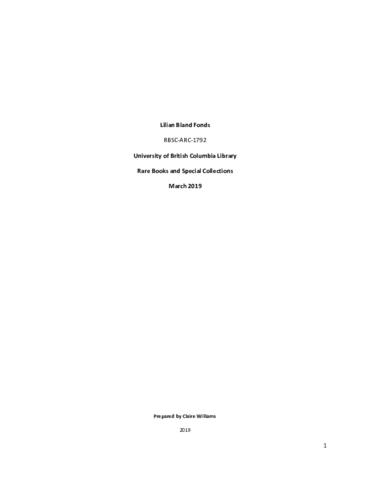 Lilian Bland is widely recognized as the first woman to design, construct, and fly her own aircraft. She was also an avid photographer, journalist, marks-woman, equestrian, motorist, and an early settler of Northern Vancouver Island.

Lilian Emily Bland was born September 27th 1878 in Kent, England. Her mother was Emily Charlotte Madden, born January 16th, 1847. Her father, John Humphrey Bland, was an artist, born in 1828. Lilian was the youngest of three children, and had an elder sister named Eva Charlotte Bland and a brother, Robert Wyndham Humphrey Bland.
During the first ten years of her life, Lilian traveled to Switzerland, Italy, and France —primarily with her father. From 1890 to 1891 she attended school at Westgate in Kent. As a young adult Lilian journeyed around the continent, occasionally moving back to Ireland to live with her father. She studied musical and visual arts and also enjoyed fishing, hunting, photography, horse-back riding, and reading. From 1903 to 1908 Lilian published several articles in various sport and lifestyle magazines. These articles were accompanied by her own photographs of horse-back riding, travel, and automobile racing. In September 1909, in Ireland, Lilian began modeling an idea for a plane, and in November she began building the biplane, called the Mayfly. The plane flew successfully for approximately 10 metres and she became the first woman to design and fly her own aircraft.

On October 3rd 1911, Lilian married her fathers’ brothers’ son, Charles Loftus Bland. Charles had recently purchased land in Quatsino, on the Northern part of Vancouver Island, British Columbia. He moved ahead of her to build a home for the two of them, and she travelled to Canada in April of 1912. In April of 1913 Lilian gave birth to her daughter, Patrick Lilian Bland.

Lilian spent the next several years making a life for her daughter and husband in Quatsino; raising livestock, farming, making wine, and selling goods. In 1917 Mary Madden, Lilian's cousin on her mothers' side, joined Charles and Lilian to work on the homestead in exchange for pay. In 1921 Lilian, Charles, and Mary all moved to California, where they purchased a farm and lived for 3 years in the small town of Calistoga in Napa County. They returned to Quatsino sound in 1925 via automobile with Mary’s son Jack Bland. In 1929 Lilian’s daughter Pat passed away from a Tetanus infection.

In 1932 Lilian and Charles separated and Lilian stayed on the homestead until 1934. After this, Lilian returned to England where she worked as a gardener, investing her savings in the stock market. In February of 1955 Lilian retired and moved to Land’s End in Cornwall. She lived there until the time of her death on May 11th 1971, at the age of 92.

The fonds was donated by Lilian Bland's relatives currently living in Vancouver. During their custody of the material they physically annotated some of the envelopes and boxes used to preserve the photographs. In addition to this, they photographed each of the images in the fonds and created descriptions for these based on their family knowledge. See notes below for further information on the state of the material when it arrived to RBSC, and the availability of digital images which arrived with the fonds.

The fonds consists of 1,398 glass plate negatives, glass lantern slides, celluloid prints and celluloid negatives, the majority of which were taken by Lilian Bland. The photographs reflect the varied and unique life of Lilian Bland and her family. The fonds includes several photographs of the Mayfly, the bi-plane Lilian famously designed, constructed, and flew. Other photographic subjects include horse-riding and horse-racing, Lilian's fathers' artwork, her husbands' travels in China, family photographs, birds and bird-watching, her travels in Europe, California, and British Columbia, and photographs documenting her years spent as a settler living on the Quatsino Sound in Vancouver Island and in California with her family.
Other record types in the fonds include Lilian Bland’s unpublished memoir, and the original enclosures for the photographs including boxes, envelopes, and box lists.
The finding aid for the fonds, attached as a PDF, includes a spreadsheet of images as they were received upon donation to Rare Books and Special Collections. A brief description created by the donor is available for each image in the finding aid.

Some of the glass plates were cracked or broken, and a few of the celluloid negatives discolored. Otherwise the materials are in fairly good condition.

The archivist arranged the items in order to reflect the order in which they were donated. Upon donation, the material was housed in over thirty wooden boxes and paper envelopes, some of which contained content lists and some of which did not. The boxes were labeled upon arrival to RBSC from Boxes A to Z. The boxes labeled X further contained boxes X-1 through X-37, and loose envelopes were labeled by number, 23 to 40, with two additional roles of negatives labelled as Roll 1 and Roll 2. All photographs within the boxes have now been assigned an institutional specific identifier (RBSC-ARC-1792-PH-XXXX) during physical processing. The donor created identifiers are available in the PDF inventory attached. Additionally, the original enclosures (boxes and envelopes) are available (See RBSC-ARC-1792-11 through 16).

Digitized images for most of the collection are available. Please contact rare.books@ubc.ca for more information.

The archivist transcribed the donor created descriptions for each photograph in the fonds. These descriptions sometimes matched the descriptions written on the boxes/box lists, and sometimes differed. If desired it is recommended the researcher compare the descriptions in the PDF inventory with the information found on the corresponding original enclosure.

The fonds was arranged and described by Claire Williams in Spring 2018.

Information derived from the following sources: