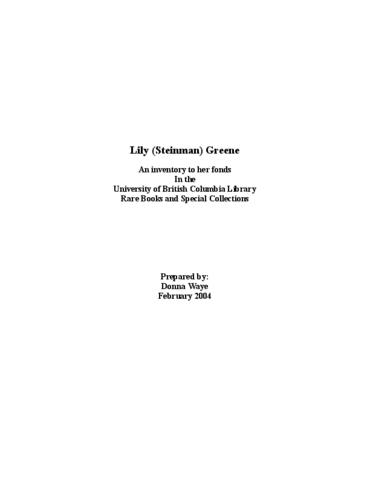 Lily (Steinman) Greene was born in 1916 in Toronto. In 1932, at the age of 16, she graduated as a stenographer from the Toronto Central High School of Commerce. After graduation, Greene began work in the needle trade. This period marked the beginning of her labour and social justice activism. As a dress-maker, she served on the organizing committee for her section of the Industrial Union of Needle Trades Workers. She also joined the Central Division of the Canadian Jewish Congress in 1938 and worked in the head office of the Worker’s Unity League and Worker’s Educational Association during that time. As part of these activities she began an ongoing correspondence with the British Columbian socialist and labour organizer Tom McEwen which continued well into the 1970s.

After the war she continued her work as a labour organizer, moving to a full-time position in the head office of the Mine, Mill and Smelter Worker’s Union. In 1967, a merger of steel industry unions took place and together they formed the United Steelworkers. Greene was assigned to the Toronto office of the merged union and worked there until her retirement in 1982 at the age of 65.

Lily married Samuel Greene in 1938. After Samuel died at the age of 59, Greene lived common-law with Ray L. Stevenson until he passed away at the age of 84.

The Tom McEwen Fonds contains personal correspondence, including numerous letters sent in support of Tom during his incarceration in the Hull Concentration Camp during the period 1941 – 1942, as well as correspondence addressed to Tom in his capacity as editor of <em>The Pacific Tribune</em>. Also included: materials relating to his Yukon election campaign of 1944 – 1945; a collection of essays and draft manuscripts written by Tom; numerous pamphlets, bulletins and other writings collected by Tom; materials related to various labour unions and labour union activity in general; and a large number of newspaper clippings.

One oversized photographic print, reference number BC-2112/22 (Paul Robeson) has been removed from the fonds and placed in Oversize shelving, where it may be retrieved.