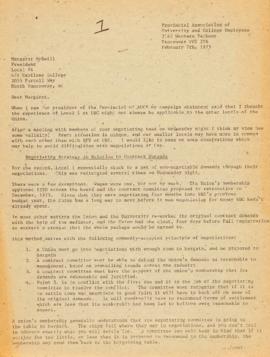 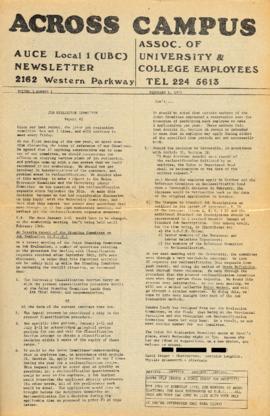 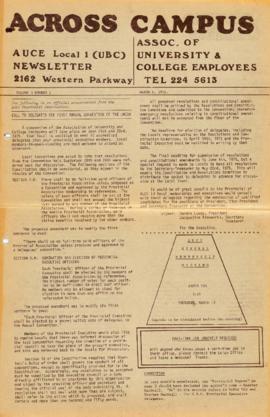 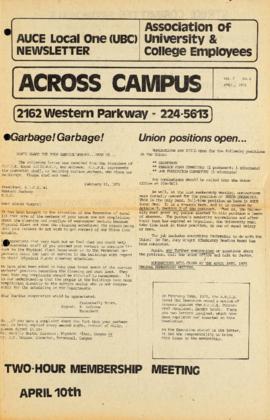 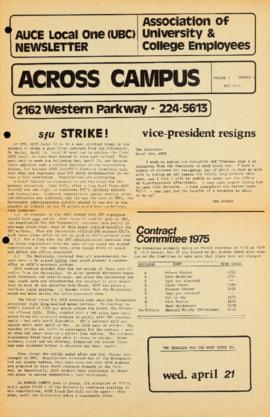 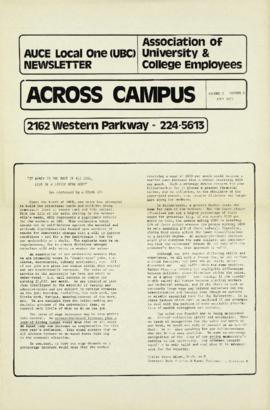 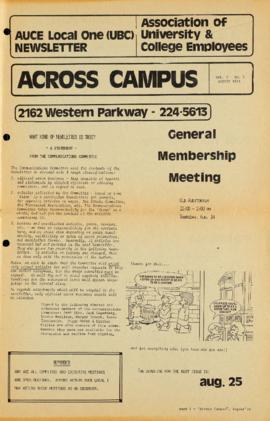 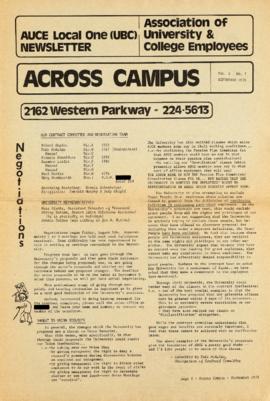 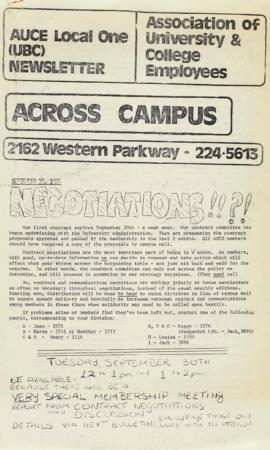 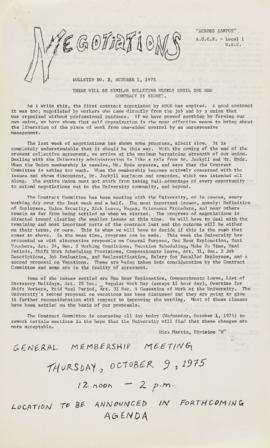 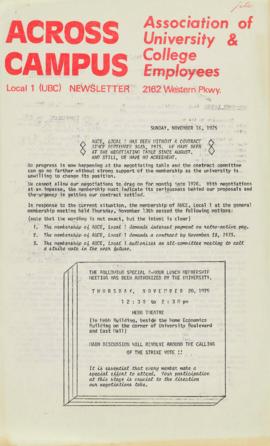 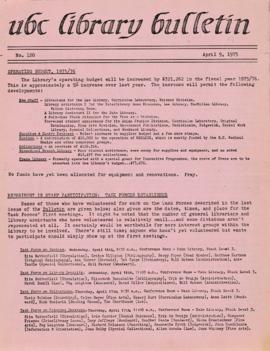 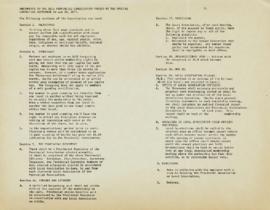 File contains correspondence, newsletters, bulletins, and other records dated February 7, 1975 to September 28-29, 1974. Topics discussed include interactions and conflict between Locals and AUCE Provincial, contract negotiations, and amendments to the AUCE provincial constitution. File also contains the following newsletters and bulletins:

Across Campus Volume 3, Number 1, February 5, 1975 includes information on job evaluation committee activities, natural and artificial lighting in the workplace, the structure of the provincial executive, executive elections, a postal strike, a report from the union office, the university community credit union, reports from Locals, the AUCE provincial, and pension committee, finances, contracts, and executive contact information.

Across Campus Volume 3, Number 2, March 5, 1975 includes information on the first annual AUCE convention and a call for delegates, grievances and reclassification, the discrimination article in the contract, the CKLG (CUPE Local 686) strike, the university community credit union, an editorial, reports from Locals and the provincial executive, and study benefits and taking courses at UBC.

Across Campus Volume 2, Number 4, April 1975 includes information on nominations, CUPE 116, strike committee proposals, commentary on the strike committee report, contract discussion and a Division D contract workshop, inflation and wages, women in the workplace, a list of contract committee members, reports on finances, communications, and a summary of the March 13, 1975 meeting minutes, the cost of living in BC, the question of paid positions in the union office, and a request for information on UBC's budget.

Across Campus Volume 2, Number 5, May 1975 includes information on the AUCE Local 2 (SFU) strike, contract negotiations at SFU, resignation of the Local 1 vice-president, a list of contract committee members, a report on Labour Relations Board hearings on student assistants and seniority steps, letters to the editor, campus co-op rental housing, reports from Locals and the provincial executive, finances, discussion on affiliation with other organizations, the future of AUCE, the benefits and drawbacks of having a provincial organization, the requirements for running a union, Malaspina College support staff withdrawing their charter with the AUCE, a book review on painting in Canada, a poem, and financial and communications reports.

Across Campus Volume 2, Number 6, July 1975 includes information on the AUCE and its members, wages and contracts, a report from the job evaluation committee, criticism of the job evaluation committee, an excerpt of an article on wage hikes, the effect of inflation on workers, a poem, a discussion of apathy, an overview of other unions operating on campus (BCGEU, HSA, CUPE, OTEU, IUOE), an appeal from the contract committee for research assistance, and facts and figures from the UBC budget.

Across Campus Volume 2, Number 7, August 1975 includes information on the form and content of the newsletter, a question about salutations in correspondence, Malaspina College staff representation by CUPE, a discussion of across-the-board and percentage increases, job evaluation, an overview of OTEU Local 15, analysis and commentary on UBC's contract proposal, a summary of Local 2's (SFU) contract, inflation and ecocomics in the USA and its effects, a glossary of terms, the university community credit union, an article on SORWUC, and changes to bus schedules.

Across Campus Volume 3, Number 7 September 1975 includes information on contract committee negotiations and members, a message from the Canadian Association for Repeal of the Abortion Laws, a membership meeting discussing wage scales, opinions on wage restraints, scheduling and meeting conflicts, supporting CUPW and boycotting the postal code, a labour studies course offered at Capilano College, a personal narrative about work, poetry, AUCE history, strikes, lockouts, and picketing, courses offered by the Vancouver People's Law School, a strike strategy for UBC, a list of organizations run by and supporting women in Vancouver, a report from the grievance committee, and a reprint of the notice of bus schedule changes.

Across Campus September 23, 1975 includes information on contract negotiations and a detailed report on the negotiation process to date.

Across Campus Bulletin Number 2, October 1, 1975 includes information on contract negotiations and updates on the process, nominations for convention delegates and table officers, the agenda for the October 9, 1975 membership meeting, statement of income and expenses, and the meeting minutes from September 11, 1975.