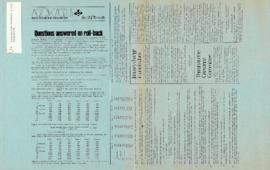 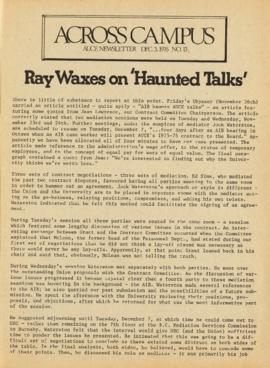 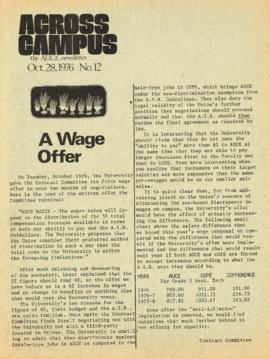 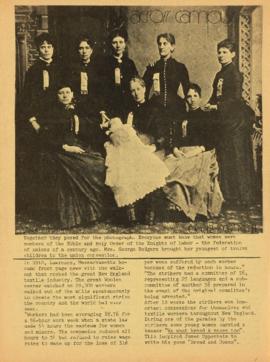 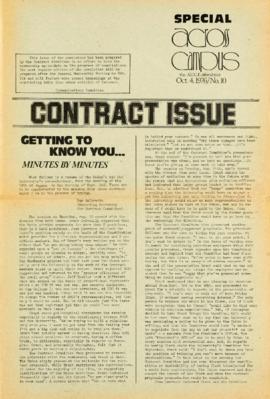 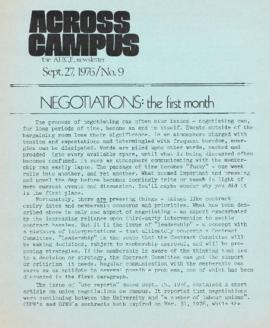 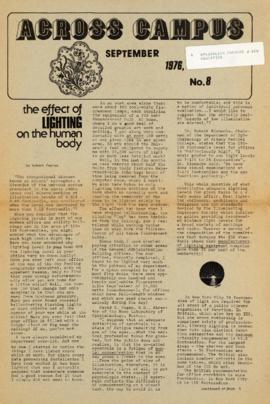 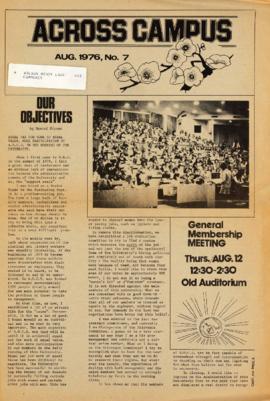 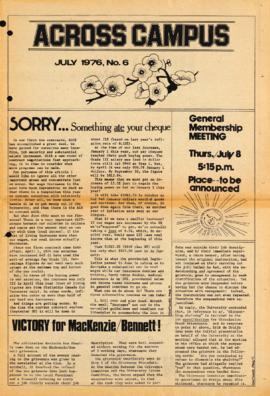 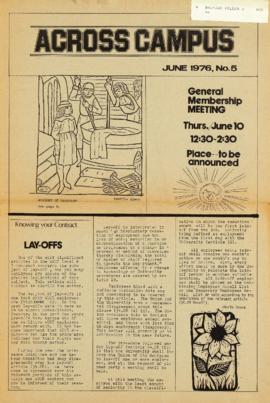 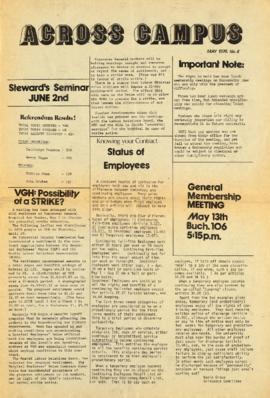 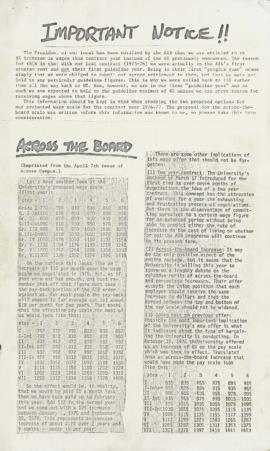 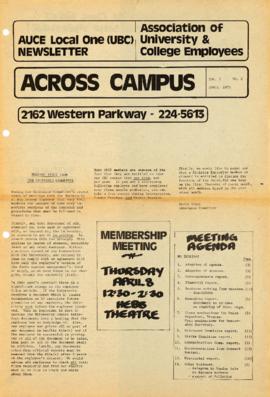 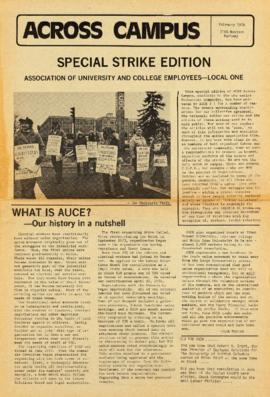 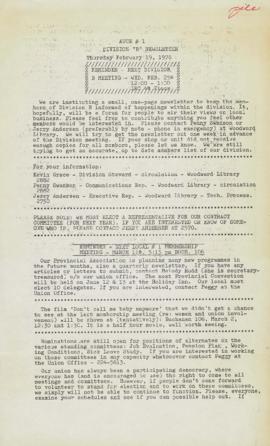 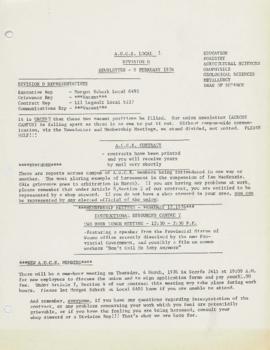 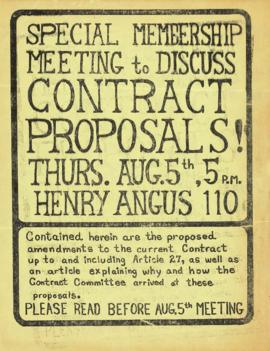 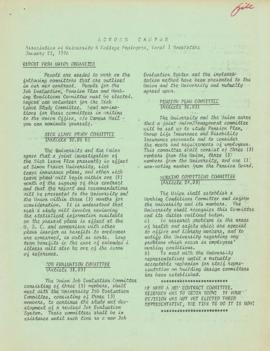 Across Campus Number 14, December 28, 1976 includes information on the Anti-Inflation Board (AIB) rollback and wages, a BCTF lawsuit against the provincial government, union dues, grievances, an AUCE steward seminar, meeting minutes from December 9, 1976, the first meeting of the joint AUCE and Professional Staff Study Committee on the Employment of Women in Non-Academic Positions, and a call for a public meeting on the AIB.

Across Campus Number 13, December 3, 1976 includes information on contract negotiations, a letters section featuring comments from members, daycare services, a statement of resignation from the president, detailed commentary on grievances and grievance process, comments from the newsletter editors, the agenda for the December 9, 1976 membership meeting, analysis of an arbitration case, meeting minutes from November 4, 1976, correspondence with UBC Employee Relations on grievances, an AUCE brief to the AIB discussing other universities and discrimination, and tables of comparative salaries at UBC, SFU, UVIC, and Capilano College.

Across Campus Number 12, October 28, 1976 includes information on the university wage offer, letters from the membership, detailed contract and grievance reports, a financial report, an assertiveness training workshop, contract committee progress, meeting minutes from September 9, 1976 and October 7, 1976, bylaw amendments, supporting CUPE in the event of a strike, nominations, censure against the delegates to the provincial convention, comments from the newsletter editor.

Across Campus Number 11, October 12, 1976 includes information on the history of women in unions, letters from the membership on topics such as job evaluation and responses to letters, university proposals, comments from the newsletter editor, and a poem.

Across Campus Number 9, September 27, 1976 includes a detailed report on the negotiation process, information on grievances, an article on the Anti-Inflation Board (AIB) wage rollback, a notice from the treasurer regarding a change in dues, a membership update, a request for volunteers, CUPE Strike Support vote results, University Community Credit Union services, operating office equipment, and a letter from the editor.

Across Campus Number 8, September 1976 includes an article on the effect of lighting on the human body, executive reports from August 12 and 17, 1976, meeting minutes from August 5, 12, and 19, 1976, with information on proposed contract amendments, corrspondence, grievances, referendum results, bylaw amendments, statements from vice-presidential nominees, articles on union participation and lighting, letters from the membership on newseltter content and day care, SORWUC's collective agreement, provincial referendum results, clippings and notices, a newsletter opinion poll, and a poem.

Across Campus Number 7, August 1976 includes an article on union objectives, an appeal to join the communications committee, notices, comments on newsletter content, an interview with an AUCE member, an article on the effects of light, clippings, reports on finances and grievances, and an executive report from June 30, 1976.

Across Campus Number 6, July 1976 includes an article on wages, the result of a grievance case, a detailed article on the safety and effectiveness of family drugs, an interview with an AUCE member, articles on the effects of light, the history of unionism, the Kitsilano Food Co-op, and Chilean politics and history, a proposed agenda for the July 8 meeting, an executive report form June 21, 1976, a financial report, a update on contract proposals, committees on women and employment, an office manual, a clipping service, provincial reports, the Skyway Luggage strike, and ""for sale"" notices.

Across Campus Number 5, June 1976 includes information on the AUCE contract and layoffs, a meeting agenda, and executive report, committee reports on strikes, job evaluation, grievances, and VGH, comments on observing the HEU picket line and essential services, cancellation of the steward's seminar, an assertiveness training workshop, an interview with an AUCE member, comments on a general strike, an article on the history of unionism, bylaw amendments, and meeting minutes from May 13, 1976.

Across Campus Number 4, May 1976 includes information on referendum results, a potential strike at VGH, the AUCE contract and employee status, membership meetings, an agenda, financial and provincial reports, mailing service costs, recommended constitutional amendments, provincial proposals, an executive report, reports on strikes and sick leave, in-depth discussion on electing a second union organizer, an article on the effects of light, a wage and price report from the BC Teachers' Federation, an interview with an AUCE member, library staff interactions with UBC administration, an article on the Labour Code, a comment on the strike fund, and a campus who's who.

Across Campus Volume 3, Number 2, April 1976 includes information on grievances, reports from the executive, strike, contract, and grievance committees, a proposal for disciplinary procedure, a provincial report, an arbitration case, steward's seminar, correspondence and letters from other organizations such as SORWUC, the Vancouver Taxi Workers' Union, the Leonard Peltier Defence Committee, and newsletter notes.

Across Campus Special Strike Edition, February 1976 includes information on AUCE history, negotiating with UBC, background on a previous AUCE strike in December 3-10, 1975, a profile of UBC vice-president Chuck Connaghan, commentary on AUCE and other unions, an open letter to trade unions on campus, a chronology of AUCE's relationship with the BC Federation of Labour, reprinted correspondence between the AUCE, the UBC Board of Governors, and the BC Federation of Labour, personal experiences of picketers, a ""did you know"" section, and comments on Bill C73.

Across Campus January 23, 1976 includes a report from the union organizer, committee reports on sick leave, job evaluation, pensions, and working conditions, commentary on the provincial association and a full time representative, a report on suspensions, an SFU staff training research group, a letter of thanks to the contract committee, notices, a meeting between staff, faculty, and students, and criticism of scabs.