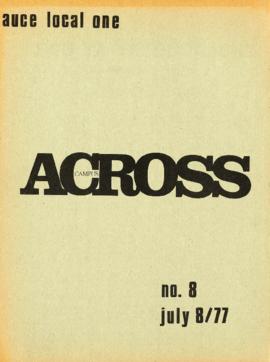 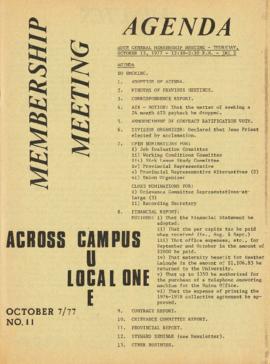 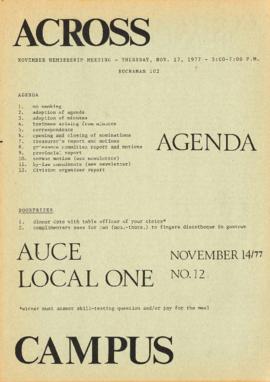 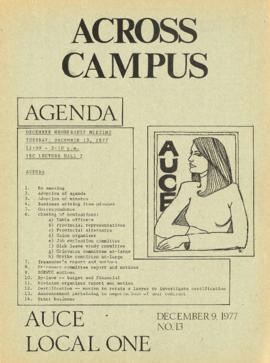 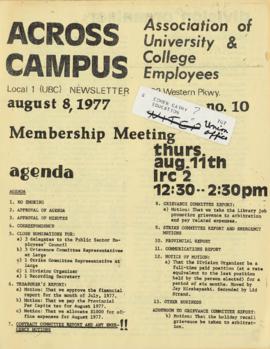 Across Campus Number 8, July 8, 1977 includes a summary of the collective agreement for July 1, 1977 to June 30, 1978, information on negotiations, wages, the AIB, highlights from the arbitrator questionnaire, correspondence, grievances, a reprinted article on incomes in BC, a summary of the provincial convention and discussions on affiliation, organizing, supporting other groups, and the new provincial executive, letters from the membership expressing criticism of handing out pamphlets, encouraging participation, and a message to temporary employees, referendum results and notices, an article on the preparation of a strike vote, comments on the AIB rollback, rules of order regarding motions, information from the strike committee, a meeting agenda for July 14, 1977, meeting minutes from June 9, 1977 and May 12, 1977, and a report from the union organizer.

Across Campus Number 11, October 7, 1977 includes a meeting agenda for October 13, 1977, meeting minutes from July 14, 28, and 29, 1977, and August 11, 1977, a reprinted article from the Miners Voice on an arbitration case, notices and letters from members, details of labour studies courses, a report from the provincial association, grievances and arbitration, the AIB payback, and a message from the president about the contract.

Across Campus Number 12, November 14, 1977 includes a meeting agenda for November 17, 1977, reports on the contract and grievances, notices and letters, correspondence with UBC Employee Relations, maternity benefits and the UIC, a division organizer report, notice of motions and their motivation, meeting minutes from October 13, 1977, employees not receiving their paycheques on time, requesting information from stewards, information on the new contract committee, reprinted articles on the wage gap, life insurance, an update on the BCGEU contract, sick leave and disability plans, a report from the treasurer and financial statements, a list of motions, a list of divisions, a union job posting, and a list of AUCE officers.

Across Campus Number 13, December 9, 1977 includes a meeting agenda for December 13, 1977, a grievance report, a reprinted article on arbitration, a report from the division organizer, motions and motivations, notices, a message from the secretary, meeting minutes from November 17, 1977, a letter of censure to the Provincial Court of BC in regards to a judge's treatment of women witnesses, comments on the contract negotiation process, a poem, reprinted articles on CUPE, and criticism of the slogan ""Right to Work.""

Across Campus Number 10, August 8, 1977 includes a meeting agenda for August 11, a report from the division organizer, a press statement from Local 2 (SFU), grievances and arbitration, a financial statement, the dental plan, and retirement policies.

Across Campus Addendum to Special Issue includes information on the strike referendum, the contract proposal, and a special membership meeting.