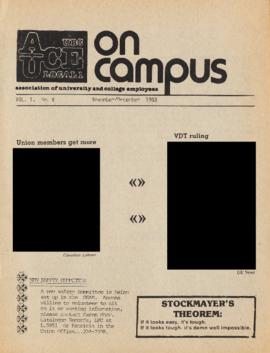 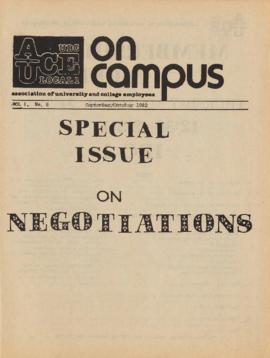 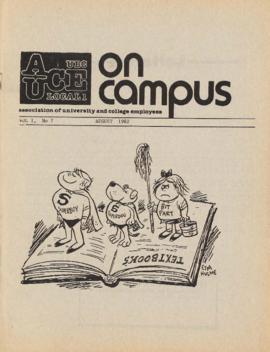 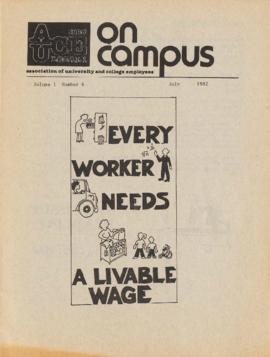 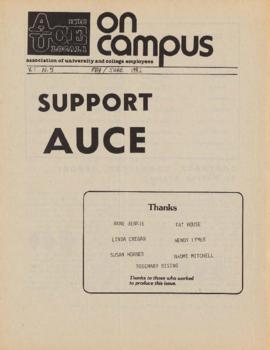 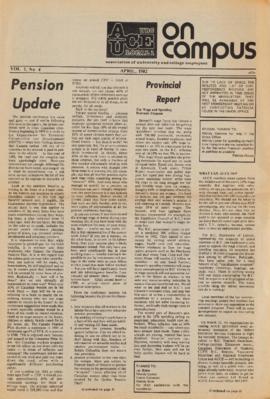 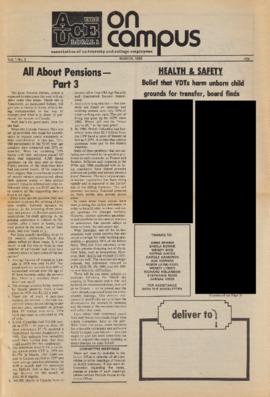 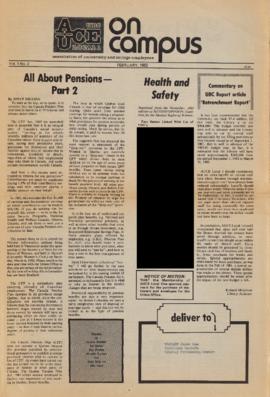 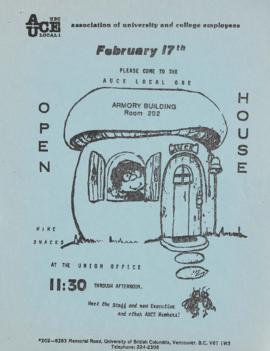 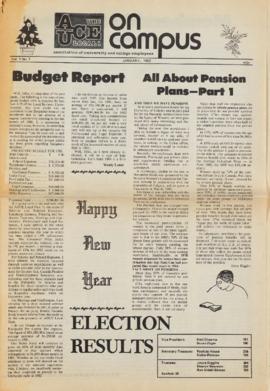 On Campus Volume 1, Number 9, November/December 1982 includes information average pay for union members, pregnant women having the right to refuse work on a Video Display Terminal (VDT), a notice about a new safety committee, letters from members, BC Tel and postal services, job slotting, a breakdown of major contract changes compared with the previous contract, a list of correspondence, a list of shop stewards, meeting minutes from October 21, 1982, and an agenda for November 25, 1982.

On Campus Volume 1, Number 7, August 1982 includes a letter of thanks, a note from the auditor, information on the departure of union officials, motions on grievances, a reprinted article on counteracting the effects of VDT use, a grievance committee report, policies on handling grievances and proposed policy amendments, a detailed executive report on challenges affecting the AUCE, the potential link between coffee consumption and pancreatic cancer, press releases on contract negotiations, a list of correspondence, notices, meeting minutes from July 22, 1982, and an agenda for August 19, 1982.

On Campus Volume 1, Number 6, July 1982 includes the results of a vote for union organizer, a letter of thanks, a letter of resignation, notices on office staffing, the leave of absence clause, and a federal government commission on part-time women workers, commentary on detainee deaths in South Africa, a brief on wage controls and equal pay, a petition against wage controls and social services cutbacks, a report on wage and spending restraints in BC, information on AUCE affiliation and Local secessions, reprinted articles on office automation, exercising at work, a message from the Organization of Unemployed Workers, a list of correspondence, motions on grievances, grievance policies, meeting minutes from June 17, 1982, and an agenda for July 22, 1982.

On Campus Volume 1, Number 5, May/June 1982 includes lists of grievance committee and executive members, a report from the contract committee, a list of shop stewards, a reprinted article on pregancy concerns for VDT operators, meeting minutes from May 20, 1982, and an agenda for June 17.

On Campus Volume 1, Number 4, April 1982 includes a detailed article on pensions, the wage and spending restraint program in BC, a book review on "The Ladykillers: Why Smoking is a Feminist Issue" by Bobby Jacobson, letters from members on day care, arbitration rulings, and a VDT study, notices on taxation of medical benefits, volleyball, and lost and found, appeals for participation in the areas of contracts and safety, information on the strike, contract, grievance, and communications committees, a pension conference report, BC Teachers Credit Union services, secession of AUCE Locals 4 and 5, support for rape relief centres in BC, a newsletter questionnaire, and an agenda for April 14, 1982.

On Campus Volume 1, Number 3, March 1982 includes detailed articles on pensions, health and safety and the use of VDTs, a report from the contract committee, a letter on affiliation, a reprinted article on mandatory retirement in Manitoba, executive meeting motions from January 7 and 28, 1982, meeting minutes from February 18, 1982, BC Teachers Credit Union services, a notice on dues deductions, and an agenda for March 17, 1982.

On Campus Volume 1, Number 2, February 1982 includes a detailed article on pensions, a reprinted article on health and safety and the use of VDTs, commentary on a UBC 'Retrenchment Report,' a grievance report, notice of motions, letters from the executive and union office, HEU negotiations, a provincial report, executive motions, meeting schedules, a notice of an open house, a list of correspondence, a contract committee report, and an agenda for February 18, 1982. Newsletter also contains an insert of meeting minutes from January 14, 1982.

On Campus Volume 1, Number 1, January 1982 includes a budget report, an article on pension plans, meeting minutes from November 26, 1981, letters from members and responses, a list of executives, an ad from the BC Teachers Credit Union, a list of correspondence, a reprinted article on a Labour Board decision at the BC Telephone Company, committee reports on grievances and contracts, a detailed executive report, lost and found, and an agenda for January 14, 1981.