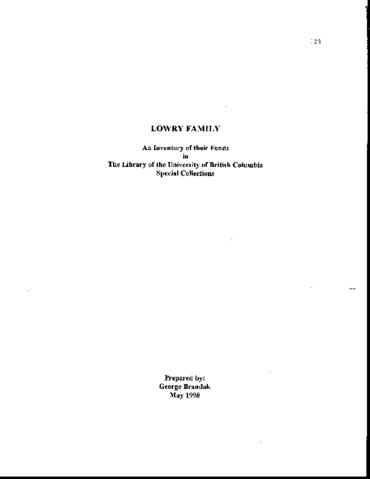 Clarence Malcolm Lowry, the fourth son of a Liverpool cotton broker, Arthur Lowry and his wife, Evelyn, was born in 1909 in Birkenhead, Cheshire, England. His brothers were Stuart, Wilfrid, and Russell. By the age of 30, when he had arrived in British Columbia, Malcolm Lowry had received a B.A. in English from Cambridge University, published a novel and travelled to the United States and Mexico. By this time he had begun work on his major novel, Under the Volcano. In 1940 he married Margerie Bonner. For the next fifteen years, he resided primarily in Dollarton, North Vancouver and travelled abroad before returning to England. His final home was in Sussex, where he died in 1957. From the time he came to British Columbia until his death, Lowry wrote novels, short stories, radio and film scripts, and poetry.

The fonds consists of family papers relevant to the life and work of Malcolm Lowry, collected by Russell Lowry and including early autograph letters of Malcolm, other relevant correspondence with his parents, Arthur and Evelyn Lowry, records relevant to the family and Malcolm's estate, personal memoire of family relationship by Russell Lowry, extensive correspondence of Russell with most scholars, including Gordon Bowker, Muriel Bradbrook, Ann Smith, and Sherrill Grace, who have studied Malcolm's life and work since the early 1970s.