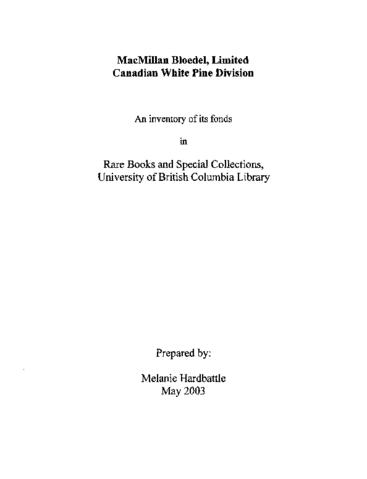 10.8 m of textual records and other material

The Canadian White Pine Division of MacMillan Bloedel Limited, located on the Fraser River in Vancouver, is one of the oldest mills on the West Coast and was the first sawmill owned and operated by the H.R. MacMillan Export Co., the predecessor company to MacMillan Bloedel Limited. The portion of the mill known as "B" Mill was originally built in 1923 as Dominion Mills and was purchased by H.R. MacMillan Export Co. in 1935. Like other large sawmills on the West Coast, the mill first produced Douglas Fir lumber in lengths up to 40 feet. Today the plant produces only Western Red Cedar, both rough and finished, for domestic and foreign markets. The Canadian White Pine Mill became part of Weyerhaeuser operations as part of that company's takeover of MacMillan Bloedel Ltd. in 1999.

The fonds consists of records of the Personnel, Safety, and Physical Plant and Maintenance departments of the Canadian White Pine Division of MacMillan Bloedel Limited, as well as some records of the Division's Manager and other divisions. The fonds includes administrative, personnel, project, and subject files containing correspondence, memoranda, reports, statistics, financial records, statements, organizational charts, brochures, newsletters, and other records. The fonds also includes many plans, photographs and slides and some artifacts. It has been arranged into the following series: Personnel Department records (1923-1997, predominantly 1941-1989); Records of the Manager (1938-1946, 1968-1974); Safety Department records (1938-1978, predominantly 1952-1976); Physical Plant and Maintenance Department records (1920-1998, predominantly 1946-1982); and general photographs (1940-1981).