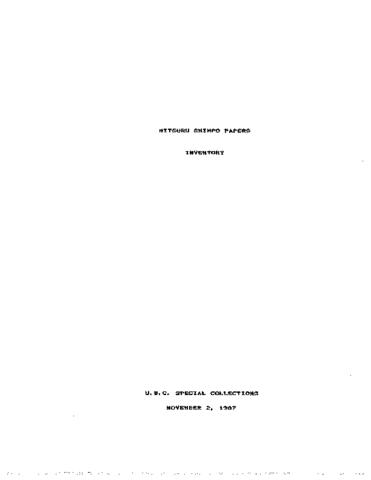 Mitsuru Shimpo was born in Manchuria. He graduated from the International Christian University in Japan (1957) and then received his M.A. in Sociology from the Tokyo Educational College. After his graduation, Shimpo returned to I.C.U. as a lecturer (1959-1962). He then emigrated to British Columbia and completed an M.A. in Sociology in 1963. Shimpo then worked as a research sociologist at the Centre for Community Studies at the University of Saskatchewan. After returning to the University of British Columbia to pursue doctoral studies, Shimpo went to Japan to carry out field work. He subsequently held positions at the Universities of Alberta and Waterloo. Shimpo has authored a number of books which focus on the sociological aspects of native Indians in Canada and Japanese Canadians.

The fonds consists of correspondence (1960-1983), scrapbooks (1970- 1977) and diaries (1962-1976). In addition there are eight sound recordings (1971) with Japanese-Canadian pioneers about their early experiences in this province and the period of the Japanese evacuation during World War II.

Most of the material is written in Japanese.

Some materials are restricted. See archivist for details.