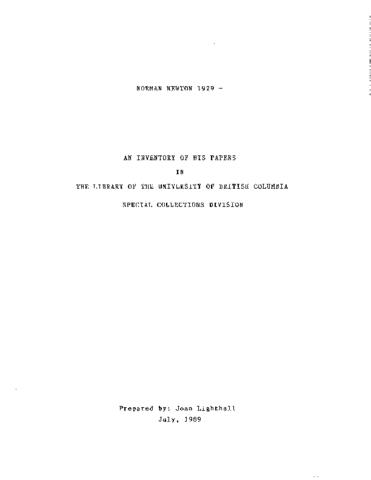 Norman Newton, a Vancouver native, worked at a variety of jobs. He spent time in England in the early 1950s, where he worked for the BBC. In 1949 his first radio transcript was accepted by CBC Radio in Vancouver. He was employed by the CBC for several years, and eventually became the senior drama producer. Newton's prime literary interest is poetry, although he has written novels, plays, histories and one libretto for the first all-Canadian opera ever to be produced in Canada. Newton resides in Vancouver.

The fonds consists of correspondence carried with peers and publishers, manuscripts of works both published and unpublished, and critics' reviews of published material. Correspondence with Derek Healey and Tibor Serly provide the framework for collaborations created, primarily by mail, with each person. Fonds includes revisions to "A Leviathon" and "The White Man from the Sea".