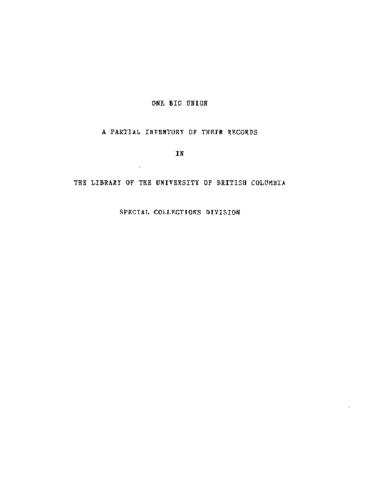 In 1919 delegates from most union locals in western Canada met at the Western Labour Congress in Calgary and resolved to conduct a referendum among Canadian members to determine if they would be willing to join a revolutionary industrial union to be called the One Big Union. By the end of 1919, a membership of 41,150 was reported in the 101 local units of the OBU which included large parts of the mine, transportation and logging labour force in western Canada. Although by 1923 the union was reduced to approximately 5,000, it served as a pioneering effort for future attempts at industrial unionism. The OBU eventually became a regional affiliate of the Canadian Labour Congress.

The fonds consists of reports of the proceedings of the first semi-annual convention of the OBU at Winnipeg in January (1920) and the second held at Port Arthur in September (1920). Also included are the results of voting in the OBU locals throughout Canada and brochures on the goals of the organization.