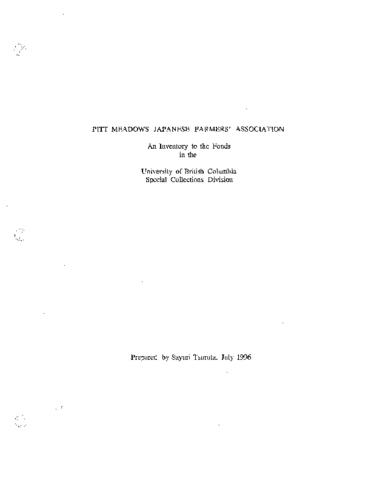 The Pitt Meadows Japanese Farmers' Association was organized in the 1920s for educational purposes and community activities. It provided information related to agricultural practices and skills through means such as seminars and brochures. Its leadership closely overlapped that of other organizations in the community such as the Japanese Language School. In 1928, it was united with other similar organizations of Japanese farmers in the Lower Fraser Valley under the Consolidated Farmers' Association of the Fraser Valley. The Association ceased to be active after the war broke out in the Pacific in December, 1941, when all the Japanese Canadian organizations were ordered to stop operating. The chairpersons and leaders of the Association in the 1930s and early 1940s included Keizo Yamada, Usaburo Hirami, Kinya Hinatsu, Kunizo Mori, Mankicki Iemoto and Sukesaku Hayakawa.