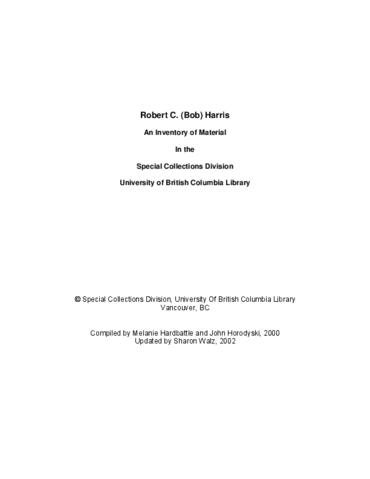 Bob Harris was born in England in 1922. After he served with the Royal Engineers during World War II, he graduated with a degree in Civil Engineering from the University of London in 1948. He was later married to Rita in July 1948 and sailed to Canada that same year. In 1950 Mr. Harris and his wife moved to Vancouver where he worked for 25 years for the Dominion Bridge Company. Then, in 1975 he moved to the structural engineering company of Buckland and Taylor where he remained until his death in 1998. He was responsible for the design and/or erection of several bridges in the Vancouver area, namely Granville, Ironworkers' Memorial, Oak Street and Port Mann Bridges. He was a member of the B.C. Mountaineering Club, North Shore Hikers, the Vancouver Naturalist Historical Society, and a volunteer Warden for Ecological Reserve Number 48. He was also commissioned to provide hiking trails (a total of 75) for B.C. Outdoors Magazine. R.C. (Bob) Harris was an engineer by profession but an historian at heart, who enjoyed the challenge of finding all the old trails in the field. He spent over 20 years visiting the Provincial Archives and the Department of Lands in Victoria, accumulating a large mass of maps, diaries and fieldbooks of the early explorers, surveyors and road builders, geologists and miners.

Fonds consists mostly of cartographic materials relating to reconnaissance trips taken by R.C. Harris. The maps are both historic and those drawn up by Harris for his trips, incorporating old trails on current maps. While the inclusive dates of the map collection are from 1835 - 1981, the majority of these maps were created from 1880 -1930. They are organized according to a personal classification system maintained by R.C. Harris. The remainder of the fonds consists of surveys, plans, photos, correspondence, topographical notes, magazine and newspaper clippings, Harris research notes, books, reports, brochures, photocopies, and book reviews.