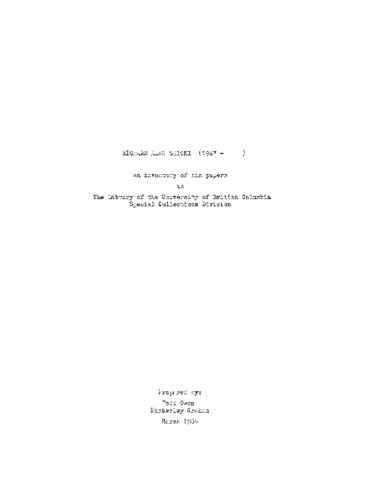 R.A. Shiomi, writer and amateur musician, was born in Toronto and received his B.A. from the University of Toronto in 1970. He afterwards came to British Columbia to study at Simon Fraser University. From 1972-1974 he travelled the world, returning to Vancouver in 1975 to teach at Langara College until 1976. In 1977, as a member of the Japanese Canadian Citizens Association, he participated in the Japanese Canadian centennial. He was also involved in producing audio-visual material about Japanese Canadian history and the history and goals of the Elizabeth Fry Society. From 1980 to 1981 he lived in San Francisco but afterwards returned to Vancouver. He was a member of the Powell Street Review and in 1980 he was co-editor of the anthology Inalienable Rice.

The fonds consists of correspondence and writings of R.A. Shiomi and material relating to the activities of, and Shiomi's participation in, the Japanese Canadian Citizens Association. There is also some material on the issue of the internment of Japanese Canadians during World War II.

Some material in Japanese.