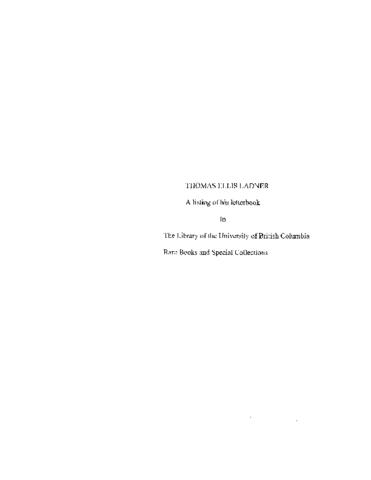 Thomas Ladner was born in Cornwall, England. He went to California in 1852, where he worked in mining and trading for six years and then travelled to B.C. in 1858. Ladner settled with his brother, W.H. Ladner, at Ladner's Landing, named for them because they were the first settlers south of the Fraser River below New Westminster. Ladner became involved in the farming and fish canning industries, most notably in the building of the Delta Salmon Cannery at Ladner's Landing and the Wellington Packing Company at Canoe Pass.

The fonds consists of a letter book (outgoing) pertaining to Ladner's activities as a manager of the Wellington Packing Company at Canoe Pass near Ladner on the Fraser River (1892-1896).