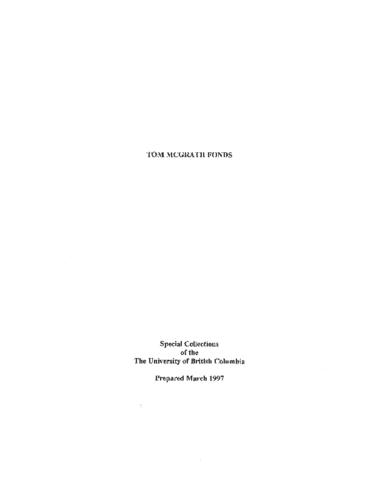 Born in Saint John, New Brunswick, Tom McGrath had a long and distinguished career in the labour movement. He was active in a Canadian Seamen's Union strike in South Africa in 1949. He was a delegate to the founding convention of the West Coast Seamen's Union which replaced the disbanded CSU on the West Coast. After the collapse of the Second Narrows Bridge in Vancouver in June, 1958, he refused to take his men back to work, was dismissed by the International Association of Bridge, Structural and Ornamental Ironworkers Union, and organized the Canadian Ironworkers Local No. 1 and became its Secretary. He was President of Local 400, Seamen's Section of the Canadian Brotherhood of Railway, Transport and General Workers, 1970-1982, as well as serving as an Inspector for the International Transport Federation in Vancouver. He served as National Vice-President for the CBRT in Ottawa for 12 years and became President of the Canadian Merchant Navy Association in 1990. He died in 1996 after a prolonged battle with cancer.