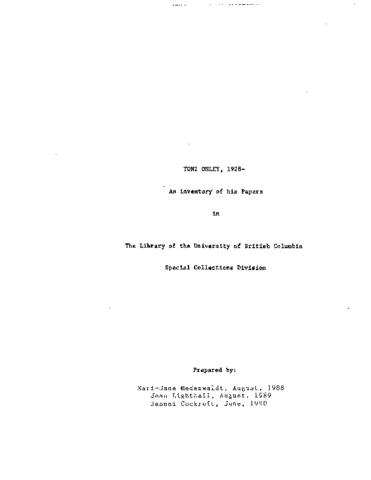 Toni Onley was a well-known Canadian landscape artist. Born in Douglas, Isle of Man, he immigrated to Ontario with his family in 1948. After stops in Penticton, Mexico, Vancouver, and England, he joined the University of British Columbia’s Department of Fine Arts in 1967, and remained there until 1976. He was known for his landscape paintings depicting B.C., the Arctic, Japan, China, India, and other locations. Onley was made an Officer of the Order of Canada in 1999. A hobby pilot, he died in 2004 after crashing his plane on the Fraser River.

The fonds consists of correspondence, diaries, log books, manuscripts, photographs, records books, gallery files, subject files, and printed material relating to Onleys career as an artist, including a record of work, sales, donations, and disputes with Revenue Canada about the taxation of visual artists. A sketchbook entitled "LEternite Cest De Trouver De Que Tu As Deja" combines the poetry of Claude Peloquin with 51 watercolours by Onley relating to his Arctic voyages.