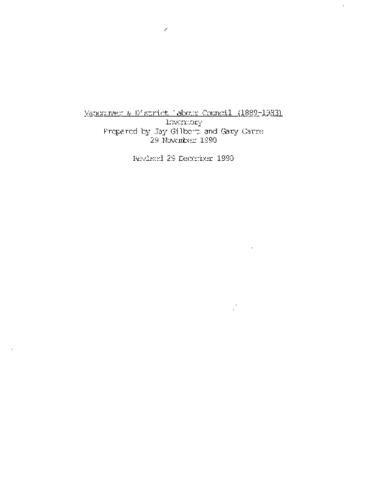 In 1889 the Amalgamated Society of Carpenters called union representatives together in Vancouver to discuss the formation of a central council to organize and represent workers. Formally constituted in 1890, the Vancouver Trades and Labour Council was funded through fees levied against its affiliate union members. In 1919 the VTLC supported the formation of the One Big Union (OBU), a full-scale industrial union based on socialist policies. The backlash against radical labour organizations after the Winnipeg General Strike (1919) resulted in the revocation of the Council's charter by the Trades and Labour Congress. Following the decline of the OBU the Council was reconstituted in 1920. In 1956 the VTLC merged with the Vancouver Labour Congress to form the Vancouver, Lower Mainland Trades and Labour Council. In the same year, it was renamed the Vancouver and District Labour Council (VDLC), which is as it is known today.

The fonds consists of minute books of both regular meetings (1889-1956) and other Council Executive Board (1907-1920) of the Vancouver Trades and Labour Council (VTLC), affiliated union files and subject files of the Vancouver and District Labour Council (1956-1983). Fonds also includes minutes from the B.C. Federationist (1912-1922), the Vancouver Labour Temple Company (1909-1920), the Oil Refinery Workers' Union (1918-1921) and an address book with clippings from the British Columbia Federation of Labour (CLC).