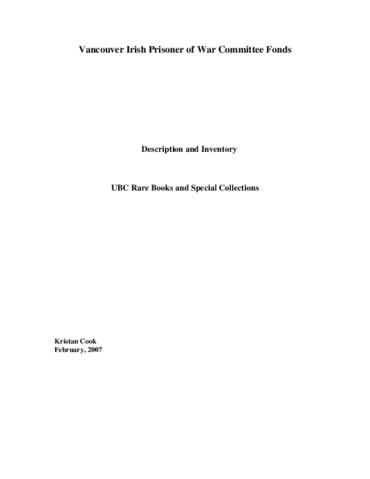 The original file titles of the V.I.P.O.W.C. and the Irish Solidarity Committee have been retained in the inventory. To further illuminate the file titles, additional information regarding subjects and materials have been added in hyphenate to the file title. The change of organizational name did not alter the records of the V.I.P.O.W.C. and the Irish Solidarity Committee. It appears that the Irish Solidarity Committee maintained and added to subject files already in use by the V.I.P.O.W.C. The V.I.P.O.W.C also subscribed to local magazines and newspapers including <em>The Celtic Connection</em>. The V.I.P.O.W.C. also received Irish Republican newspapers from Ireland including <em>An-Phoblact</em>, <em>The Andersontown News</em>, <em>Troops Out</em>, <em>The Starry Plough</em>, <em>The Captive Voice</em>, as well as magazines related to Women’s rights such as <em>Iris</em> and <em>Women in Struggle</em>. These magazines and periodicals have been removed from the fonds, but can be located in the UBC library catalogue.