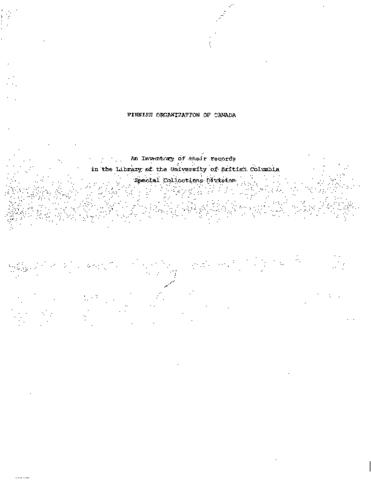 The Finnish Organization of Canada traces its roots to 1906. Organized in 1923, Vancouver Local No. 55 of FOC became the most influential local on the west coast. During World War II the FOC, as with other leftist organizations, was banned by the federal government. The FOC and its locals were again permitted to resume operations at the end of 1943. Although the organization has experienced a decline over the years, Vancouver Local No. 55 has survived and continues to pursue the traditions and ideals of FOC.

The fonds consists of photocopied minute books of the Finnish Workers' Association "Raivaija" (1910-1918), Finnish Organization of Canada, Local No. 55 (1934-1969), and Webster's Corner Socialist Local (1922-1955). The fonds also includes photocopies of financial records of Local No. 55 (1949-1957) and of subject files pertaining to the development of the Finnish culture in Canada.