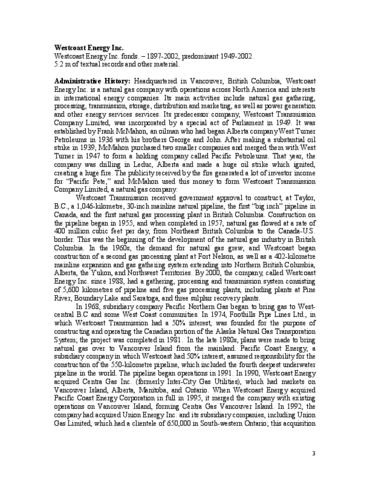 5.2 m of textual records and other material

Headquarters in Vancouver, British Columbia, Westcoast Energy Inc. is a natural gas company with operations across North America and interests in international energy companies. Its main activities include natural gas gathering, processing, transmission, storage, distribution and marketing, as well as power generation and other energy services. Its predecessor company, established by Frank McMahon, was incorporated by a special act of Parliament in 1949. By 2000, the company, called Westcoast Energy Inc. since 1988, had a gathering, processing and transmission system consisting of 5,600 kilometres of pipeline and five gas processing plants, including plants at Pine River, Boundary Lake and Saratoga, and three sulphur recovery plants. In March, 2002, Westcoast Energy Inc. was acquired for $8 billion by the U.S. Company Duke Energy.

The Westcoast Transmission Company was incorporated in 1949 to extract and distribute natural gas and provide other energy services. Established by Frank McMahon, it had its headquarters in Vancouver. In 1988 the name of the company was changed to Westcoast Energy. By 2000, the company had five gas processing plants and three sulphur recovery plants. In March, 2002, Westcoast Energy was acquired by the U.S. company Duke Energy.

The fonds consists of records created or accumulated by Wescoast Energy Inc. its predecessor company Westcoast Transmission Company, Limited, and their subsidy companies. Records relate to the activities of these companies and the gas and energy industry in British Columbia and North America, and have been arranged into the following eleven series: legal and financial records (1950-1996); record books and minute books (1949-1980); subject files (1949-2000); corporate publications (1950-2002); publications relating to Westcoast Energy Inc. and its subsidiary companies (1957-2002); books, articles and other publications relating to the energy industry in British Columbia and North America (1897-1996); executive speeches and addresses (1957-1997); photographs and slides (1950s-1994); video recordings (1978-1995); scrapbook (1957); and maps and plans (1945-1994).