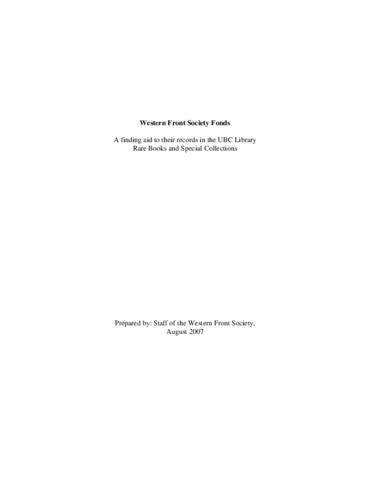 16 m of textual records and other material

The Western Front was founded in 1973 by eight artists who wanted to create a space for the exploration and creation of new art forms. It quickly became a centre for poets, dancers, musicians and visual artists interested in exploration and interdisciplinary practices. One of Canada's oldest Artist Run Centres, the organization is situated in a turn of the century wooden building that houses a gallery, concert hall, dance hall, and production studios for electronic and print media.

As a focal point of experimental art practice through the 1970s and 1980s, the Western Front, in connection with other centres like it, played a major role in the development of electronic and networked art forms in a national and international context. This included video art, sound-art, the use of telecommunications to establish a global arts network, and the development of interactive technologies to explore the connection between the art-viewer and the art-space. In the 1990s the organization produced a number of multidisciplinary festivals and city-wide collaborative exhibitions including the Electronic Arts Festival, Reinventing the Diva, and Jiangnan.

Over the years the organization has become the training ground and springboard for many young artists, especially those working outside the commercial art market. With a staff of ten people plus interns and volunteers, the centre now produces over 100 events a year. Its artist-in-residence program invites artists from many different countries to produce new works in media/electronic art. It maintains five programs (Exhibitions, Front Magazine, Media Arts, New Music, and Performance Art), and publishes monographs, catalogues, audio works and a magazine which serves both as a newsletter to members and as a vehicle for new writing, photography and interdisciplinary performance. The Western Front maintains an extensive archive (video and audio tapes) of work created and presented over the past thirty years, and is committed to preserving the artistic legacy of Canada's artistic community.

The fonds consists of administrative files including operating and project grants; correspondence; artist and project files relating to events, productions and exhibitions; and promotional and publicity materials. Some files include photographs and drawings.;The fonds have been arranged into nine series: general programming, administrative, exhibitions, Front Magazine, Luminous Sites, media arts and video program, new music, performance art, and publicity and promotional materials. As much as possible, the files are arranged as they were by the original curators and program administrators. Early records (1973 1983) for all the programs are grouped together. Video program files were separated starting in 1976 when the program began. Following 1983, the programs each had individual curators.