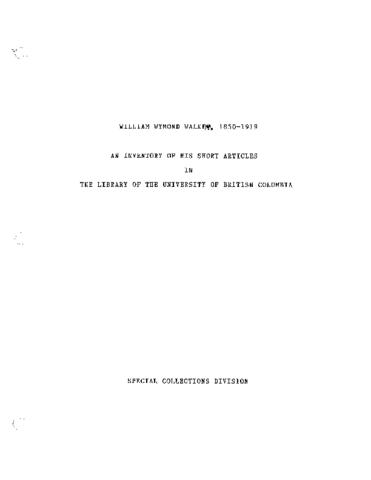 William Walkem, physician and brother of B.C. Premier George Walkem, was born in Montreal. He graduated from medical school at McGill University in 1873. While a student, Walkem served as a reporter for Montreal newspapers. Later he sailed as a seaman to Britain where he tried unsuccessfully to join the Carlist forces in Spain. On his return to Canada, he married and went to British Columbia to serve as secretary to his brother. He was briefly editor of the Victoria Daily Standard, medical officer for Victoria, for Nanaimo, and for various mining and milling companies, and he served as an MLA for Nanaimo South from 1894 to 1898.

The fonds consists of a number of typewritten manuscripts for short articles by Dr. Walkem as well as clippings of published articles. The fonds also includes Walkem's incomplete autobiography, a scrapbook of clippings relating to his experiences as a MLA and photographs.