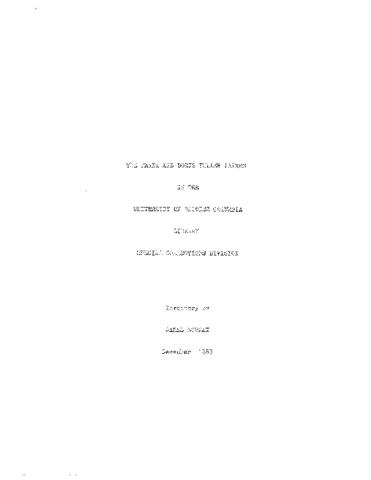 Frank Fuller was born in Fort Worth, Texas in 1917. Doris Fuller was born in Stockton, California in 1922. They were married in 1945 and moved to California in 1946. The Fullers both received B.A.'s in Geography in the early 1960s and in 1963 they began their teaching careers. In 1967 they moved to Sechelt, B.C. where Doris Fuller became president of the Sechelt Teachers' Association and Frank Fuller became head of the Labour Liaison Task Force of the British Columbia Teachers' Federation. He later became the founding president of the Labour History Provincial Specialist Association of the BCTF and, in 1980, he developed a curriculum on the Sechelt Indian cultural heritage.

The fonds consists of correspondence, subject files and photograph albums pertaining to the Fullers' professional careers, labour activities and personal lives. The fonds also contains materials which reflect the activities of the Labour History Provincial Specialist Association of the BCTF and the Sechelt Indian Curriculum Project and a film, "For Twenty Cents a Day".