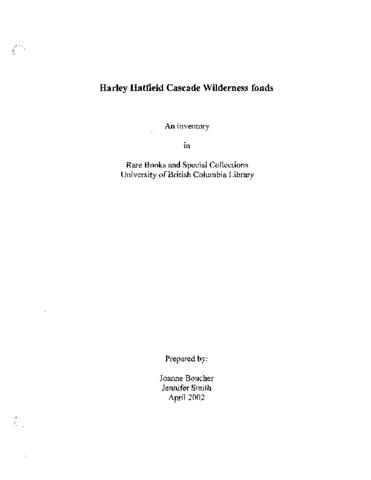 1.48 m of textual records and other material

Harley Robert Hatfield was born on February 28, 1905 in Saint John, New Brunswick. He moved to British Columbia with his family in 1907, and spent most of his life in Penticton. After graduating with a Bachelor of Arts degree from the University of British Columbia, Hatfield and his father established Interior Contracting Company Ltd. in Penticton. He married Edith White Tisdall in 1932 and the couple had four children. During World War II, Hatfield served with the Royal Canadian Air Force and the Royal Canadian Engineers. In the 1950's he became one of the founding members of the Okanagan Similkameen Parks Society (OSPS). He was also a director, writer, and eventually, Honourary Life Member of the Okanagan Historical Society, and an active member of the Wilderness Advisory Committee. His efforts to restore both the Hudson's Bay Company and Okanagan Brigade Trails were ewarded with the naming of Mount Hatfield, in his honour, in the late 1960's, and a Heritage Canada Foundation Award in 1981. Hatfield also served as a director of the Engineering Institute of Canada (1961 to 1971), an alderman for the City of Penticton (1965 to 1968), an Executive Member of the Similkameen Regional District (1965 to 1969), a member of the Penticton Board of Trade, and in various capacities with the Boy Scouts. He died on February 14, 2000.

The fonds consists predominantly of textual, graphic, and cartographic materials documenting the efforts of Harley Hatfield, in conjunction with the Okanagan Similkameen Parks Society, the Wilderness Advisory Committee, and the Okanagan Historical Society, to establish the Cascade Wilderness area and the Hudson's Bay Company and Okanagan Brigade. The fonds also includes textual records illustrating Hatfield's research into old fur trading routes in that area. Additional material document facets of Hatfield's personal life and other interests.