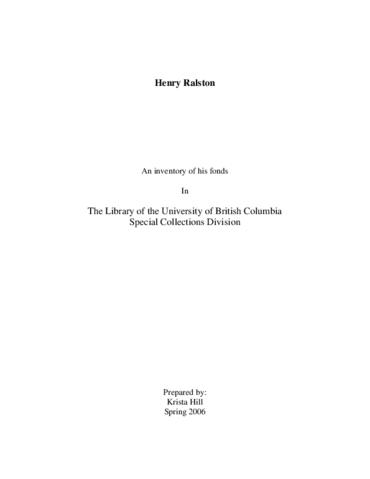 Henry Wellington Ralston was born on January 20, 1887 in Birtle, Manitoba. He enlisted in the Canadian Expeditionary Force in 1914, and fought in World War One, where he was severely wounded. As a result of his injuries, he was unable to work at an indoor occupation, and found employment as a driver-salesperson in the bread service industry in Victoria, British Columbia. Henry Ralston died in Victoria in 1943.

The fonds consists predominantly of correspondence between Henry Ralston and his future wife, Gertrude M. Walker during his military service in World War One. Some correspondence of Gertrude Walker herself is also included, as well other miscellaneous letters. In addition to correspondence, the fonds contains newspaper clippings and broadsheets, cards, and Military and Defence receipts.