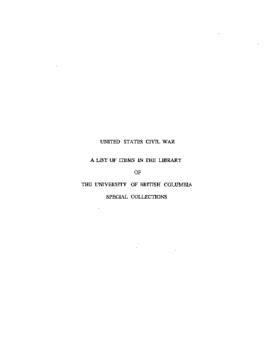 The collection consists of five letters (1863-1871); a diary belonging to Charles O. Eaton of Boston; a list of clothing and other garrison camp equipment of Lt. William McKinley, Jr.; two broadsides; a printed report of a meeting of the citizens of Bobb County, Georgia (1860); a publication of the Manchester Union and Emancipation Society; a lock of Mrs. Robert E. Lee's hair and an engraving of General Ulysses S. Grant and family.