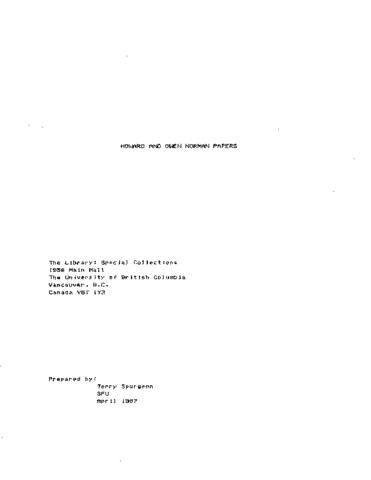 Howard Norman (1905-1986) was born in Japan and after graduating from the University of Toronto he studied to become a minister. Ordained in 1931, he returned to Japan where he served until 1941. Norman was minister at St George's United Church (Vancouver) from 1941 to 1947 during which time he was very active on behalf of Japanese Canadians. After returning to Japan in 1947 where he served in various capacities, Norman retired to Canada in 1972.

The fonds consists of correspondence between E. Herbert Norman and his family (1922-1957), Norman's will and photographs of him and other family members. There are also articles about his career and other biographical information gathered for tributes after his death. Also included are materials generated by his brother Howard Norman.