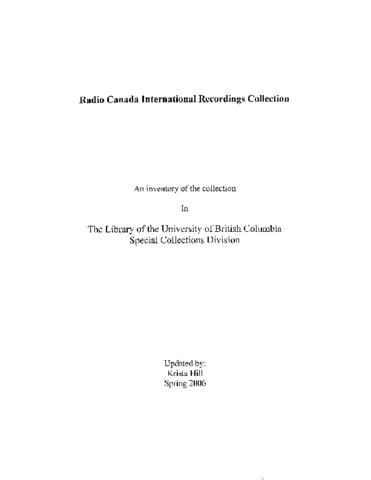 Radio Canada International (RCI) is the Canadian Broadcasting Corporations (CBC) international service, and originally began broadcasting in 1945, just prior to the end of World War II. Originally intended as a way to provide a service to Canadian soldiers in Europe, RCI quickly realized that there was a need to develop awareness about Canada and Canadian identity around the world and now broadcasts to the United States, Central and South America, Europe, Africa and Asia. In an effort to provide information about Canada and Canadian people, places and events to the Japanese, Radio Canada International began broadcasting Canadian news and information on a Japanese-language current affairs program in 1983.

The collection consists of audio cassettes and vinyl records (33 1/3) created by Radio Canada International in the course of promoting Canada and Canadian culture to the people of Japan. The collection has been arranged into four series, which reflect the various formats the broadcasts were made up of, and include Japanese Topical Cassettes, Japanese Economic Topical Cassettes, Japanese Canadian Magazine, and Japanese Topical Discs.