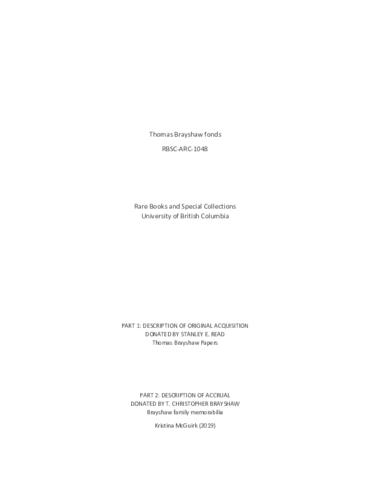 80 cm of textual records and other material

Thomas Brayshaw was born March 3, 1886, in Stackhouse in Yorkshire, England. He moved to British Columbia by 1911. He returned to England with World War I, serving in the Duke of Wellington`s Regiment, part of the Territorial Force, including a role as a revolver instructor. He was seriously injured while at the Western Front in France in 1915.

He married Edith Rebecca Sugden, who he met while she was a member of the Voluntary Aid Detachment searching with the Red Cross, in Wakefield in 1916. They had one son, Thomas Christopher Brayshaw. The family returned to British Columbia in 1920.

Brayshaw worked as a fruit grower and schoolmaster at Vernon Preparatory School in Vernon, B.C., until joining the WWII efforts from 1940-1945. He served as an army counsellor and recruiting officer, reaching the rank of major.

He was a well-known sport fisherman and devoted most of his adult life to catching, studying and drawing of fish, illustrating several of Roderick Haig-Brown's books. Brayshaw achieved recognition for his wooden fish carvings. He was a founding member of the Hope Rod and Gun Club, serving as president from 1948-1961, and a charter member of the Federation of Fly Fishermen. He died October 10, 1967, in Vancouver, B.C.

The original acquisition (Part 1) was donated by Stanley E. Read to the University Archives in 1971. It was transferred to Rare Books and Special Collections in 1978. The accrual (Part 2) was acquired from the estate of Thomas Brayshaw’s son, T. C. Brayshaw, in 2016.

The fonds consists primarily of Thomas Brayshaw’s fishing diaries (1932-1964) and correspondence, manuscripts, and subject files (1907-1967). This is largely reflective of Brayshaw’s work and related interests. The fonds also contains a collection of documents and research related to the Brayshaw family, containing genealogical research, and family photographs, personal records and artefacts. This includes some personal records of Thomas Brayshaw, notably war service records, and some photographs and fishing flies related to his work and interests.

PART 1 (Boxes 1-5) is the original acquisition of Thomas Brayshaw’s papers, arranged and described according to how the files were received.

No future accruals are expected.