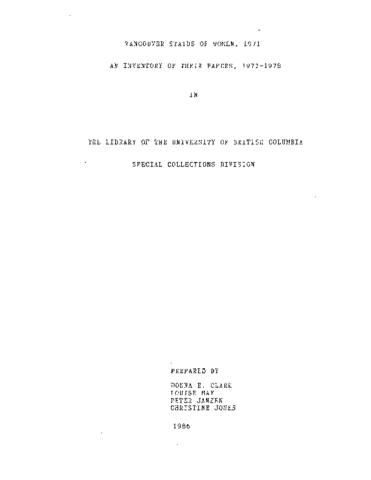 36.4 m of textual records and other material

Vancouver Status of Women (VSW) was formed in 1971 in response to the Report of the Royal Commission on the Status of Women set up by Prime Minister Lester Pearson in 1967. VSW’s goals were to ensure that the recommendations of the Royal Commission were implemented, foster public knowledge of women’s issues, and facilitate communication amongst individuals and groups concerned with the status of women. The organization was originally named the British Columbia Status of Women Action Co-Ordinating Council (BCSWACC), then the British Columbia Status of Women Council (BCSWC). By 1973, the organization had legally incorporated and changed its name to its present incarnation.
In its early years, VSW conducted research and prepared education materials for women, government officials, and the general public. The organization participated in committees and task forces set up by all levels of government, advocated for individual women through the provision of an ombuds-service, produced a weekly television program called “Women Alive,” and distributed interviews and press releases to the media. From the 1970s until the early 1980s, VSW tended to center on the concerns of white, middle-class, cisgender, heterosexual women. From the early 1990s onwards, due to activism from women of colour and queer women that resulted in organizational re-structuring and the implementation of an affirmative action hiring policy, the white and heteronormative culture of the organization began to shift. It was not until 2001 though that VSW implemented a trans-inclusive policy. VSW’s transphobic practices were confronted during this time by queer feminists of colour, who pushed for the VSW coordinating collective to engage in processes of critical education around this subject. In 2008, VSW’s policy statement was again revised to include intersex, non-binary, and pan-gender individuals.
From 1974-2001, VSW published Kinesis, a national feminist newspaper that was issued ten times a year. Kinesis had an anti-oppression mandate, and thus featured articles that combatted sexism, racism, classism, homophobia, ableism, imperialism, and other forms and systems of marginalization. Beginning in 1991, VSW released its Single Mother’s Resource Guide. In 2005, VSW also released its Welfare Resource Guide for Women, which includes information about B.C.’s welfare system and employment insurance regulations.
Since its inception, VSW has addressed the following issues: discrimination in the public education system, pay equity, violence against women, the lack of community services for women, pensions, pornography, inadequate unemployment and welfare rates, the anti-choice movement, and corporate globalization. Beginning in the mid-1990s, VSW began to prioritize anti-racism and anti-oppression work, as well as concerns specific to immigrant women, Indigenous women, women of colour, single mothers, and others. In the early 2000s, VSW engaged in learning about issues affecting transgender individuals and shifted its policies to be trans-inclusive.
VSW’s funding sources and organizational structure have shifted substantially over its existence. In 1973, the organization received funding from the federal government, the provincial government of B.C., and the City of Vancouver. It maintained a staff of 13 and featured a Board of Directors. Volunteers were frequently involved.
In 1983, the Social Credit government in B.C. withdrew all provincial funding from the VSW. After sustained lobbying, VSW procured a small operating grant from the federal government through the Secretary of State Women’s Program. VSW continued to receive financial support from the City of Vancouver. Following this, VSW reduced its number of permanent staff to four. A further 15% reduction in Secretary of State funding in 1989 and a 10% reduction in 1993 reduced the VSW staff to three full-time and three part-time individuals. In 1987, VSW moved from its location in Kitsilano to Grant Street, just off Commercial Drive.
In 1992, VSW changed its organizational structure from a board of directors to a coordinating collective comprising staff and volunteers. In addition, VSW implemented a consensus decision-making model and developed an affirmative action hiring policy. As a result, more women of colour and Indigenous women took up employment at the organization. VSW’s affirmative action hiring policy also led to new partnerships with groups such as the Aboriginal Women’s Action Network and the South Asian Women’s Centre. In 1997, VSW moved to a location on East Hastings Street.
In 2002, the B.C. provincial government announced that it would cut core funding to 37 women centres. VSW protested this decision alongside other organizations, including the BC Coalition of Women Centres and End Legislative Poverty. On March 12, 2004, five members of the BC Coalition of Women Centres—including a staff member from VSW—occupied a room of the B.C. Legislature after a half hour meeting with Ida Chong to protest these cuts.
By 2004, VSW’s core funding from the provincial government ended, and the organization lost $48,000 annually. In the same year though, as a result of donations, VSW was able to purchase 2642 East Hastings Street to set as their headquarter. In 2005, the organization received funding from Direct Access gaming, the City of Vancouver, Status of Women Canada, and donors and members.
In 2020, the organization closed down their physical office and plan to rethink how they can function as an association moving forward.

The fonds consists of records related to Vancouver Status of Women’s (VSW’s) administrative activities, projects and lobbying endeavours, production, marketing, and distribution of Kinesis, their activities related to their advocacy function, and research and reference resources. Although the nature of VSW’s activities has changed over time, the organization has consistently maintained a commitment to addressing social issues related to women, including gender discrimination, pay equity, familial violence, racism, and many more topics. VSW has addressed these issues through a variety of avenues, including publications, press releases, lobbying of governments, a television program, workshops, and services for individuals in Vancouver. The fonds reflects these diverse organizational interests and activities in five series: Administrative and Executive, Advocacy, Kinesis, Research and Reference Resources, and Projects and Lobbying Activities. Additionally, the fonds contains alphabetized subject files dating from 1971-1978. Early accruals are grouped into sets and described in the attached PDF finding aid.
The Administrative and executive series contains records pertaining to operational and executive activities including finance, committee and volunteer administration, employee management, correspondence, and strategic planning for the organization. Record types include grant applications, correspondence, invoices and receipts, meeting minutes, training materials, and correspondence.
The Advocacy series features records related to VSW lobbying and advocacy activities. These activities primarily included organizing and participating in committees and task forces set up by all levels of government, lobbying, and preparing briefs on legislative documents and materials. Record types include correspondence with the ministry of justice and different coalitions such as BC Coalition of Women Centres, and 52% Coalition; meeting agendas and minutes, information sheets and brochures, event invitations, and forums.
The Kinesis series includes records related to production, publication, marketing, and distribution of Kinesis, Vancouver Status of Women’ most significant publication in BC. Record types include design sketches and proofs, advertising, readers’ correspondences and surveys, volunteer training manuals, staff self-evaluations, and monthly activity reports.
The Research and Reference Resources series comprises materials from third parties that VSW collected to support its research projects and the needs of its visitors. The series also contains VSW briefs, press releases, and reports inter-filed with research materials. Record types include briefs and reports from other organizations, newspaper and magazine clippings, VSW correspondence, grey literature, copies of academic journals, and cassette tapes in honour of International Women’s Day.
The Projects and Lobbying Activities series features the records of VSW’s numerous and diverse projects and lobbying activities. Record types include VSW briefs, press releases, submissions to government, research reports, publications, correspondence, indexes for back issues of Kinesis, and volunteer applications.

All records transferred directly from VSW.

The first accession of this fonds features records from 1971-1978. This accession is described in the attached PDF. Subject files are grouped into three categories: Office Files, Periodicals, and Reports and Miscellaneous Files. From 2019 and later accrual, subject files are in the Projects and Lobbying Activities series.

Some records in the fonds are under copyright. Permission to reproduce copyrighted materials must be obtained from the copyright holder(s).

No further accruals are expected, however photographic materials from the 2019 and 2021 accrual, specifically the Kinesis Photobank and Production Room Materials series, are still to be fully processed. These photographs were minimally processed and are currently accessible.