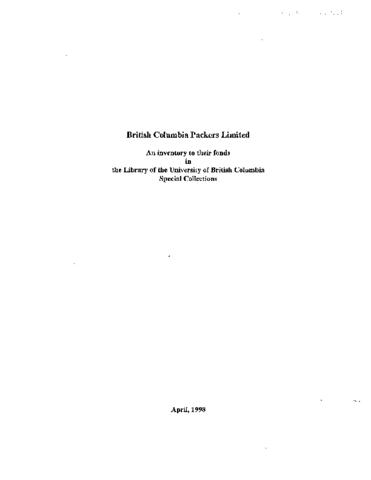 4.2 m of textual records and other material

Much of British Columbia Packers expansion outside of British Columbia took place after the Second World War. It began to acquire sales offices and production facilities in the United States in the late 1940’s, and this continued in the following decade. For example, the company acquired Freeman’s Certi-Fresh Foods of Los Angeles, California, in 1954, and Coast Oyster Company, with assets in California and Washington, in 1956. In 1957, it acquired interests in fishing operations in Peru. In 1967, British Columbia Packers began a joint venture with Nelson Brothers Fisheries Limited in herring meal and oil production at Isle aux Morts, Newfoundland. In the late 1970’s, British Columbia Packers acquired a 30 percent interest in Mar Fishing Company, Inc., which produced tuna out of a plant in Mindanao, Philippines.

British Columbia Packers appears to have been administered out of head offices in Vancouver until 1968, and thereafter in Steveston. At the company’s peak of size and scope in the late 1970’s, eight Vice-Presidents were responsible for the following functional or operational designations: finance, planning, marketing, Pacific operations, production/British Columbia operations, Philippine operations, United States operations, and industrial relations.